Just before Christmas last year, Arnold Schwarzenegger (of Mr Universe, Terminator, Governor of California fame… you’ve heard of him, right?) posted a short essay on Facebook about climate change. It was titled:

I don’t give a **** if we agree about climate change

A fantastic, emotive title, but even better is what he had to say in the post – he refused to spend the time debating with naysayers who didn’t believe in climate change. Just took this waste of time and energy arguing about ‘the facts’  right out of the equation.

“To use one of the four-letter words all of you commenters love, I don’t give a damn if you believe in climate change. I couldn’t care less if you’re concerned about temperatures rising or melting glaciers. It doesn’t matter to me which of us is right about the science.”

By wiping the table clean, he could focus on what was important – that if we wish to continue living the lives we do, we need clean, renewable energy.

“Do you believe coal and oil will be the fuels of the future?
Everyone agrees that eventually they will run out. What’s your plan then?
I, personally, want a plan. I don’t want to be like the last horse and buggy salesman who was holding out as cars took over the roads. I don’t want to be the last investor in Blockbuster as Netflix emerged.”

He then insists it is time to invest in a clean energy future, and backs it up with the simplest way to win any political argument – by quoting how much money can be made/saved by changing to renewable energy sources.

You can’t argue with the numbers!

Schwarzenegger’s essay is a masterpiece. Not just because it supports an idea we think is important and are emotionally invested in, but because he changes the terms of engagement and concentrates on the heart of the matter – making change.

He is one interesting and smart man (oh yes!) and at Modern Mint we salute the work he is doing to help the planet. 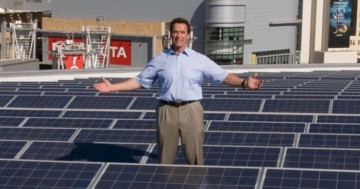 “A clean energy future is a wise investment, and anyone who tells you otherwise is either wrong, or lying. Either way, I wouldn’t take their investment advice.”

To read the whole essay you can visit Arnold Schwarzenegger’s Facebook page here.

To see how a farm in the UK is combating climate change, read our blog post on Wild Farming at Village Farm.

To turn your garden into a sustainable haven, there is only one book you need – How To Create an Eco Garden by John Walker, the earth friendly gardener.

A Topiary Calendar – When To Prune

Below are a few pointers on when you need to think about your topiary and hedges this year, so you can make sure you clip at the best time and not waste any effort doing work you don’t need to do… January & February Roses, fruit trees and wisteria is where the focus lies. Yes, it is cold and the work can be unpleasant because you are often stood on a ladder with your secateurs, barely moving enough to warm the body, but get these jobs done well, with care, and you can enjoy the fruits and flowers of your …

The English Garden Magazine – On Our Topiary Workshop

Last September when I and topiary artist (and mentor) Charlotte Molesworth ran a weekend of topiary masterclasses we had a visit from the garden writer Non Morris. You can read more about Non and her garden design work and writings here. She has written a lovely article for the February 2022 edition of The English Garden Magazine about her afternoon working with us and learning about topiary – I’m really thrilled by the piece, because she mentions not just a little of the wonderful history of Balmoral Cottage and how the garden grew, but also shares a little of how …

This Autumn I have presented another ‘Topiary Provocation’ to keen gardeners and designers. If you want to know more about topiary, the report on what we discussed and where modern topiary is going can be read by clicking the link below: Topiary Provocation Report Autumn 2021 This report is free to post on your own website or blog, just credit Modern Mint, and don’t change anything within it. Alternatively you can just share it with keen friends… or enemies?