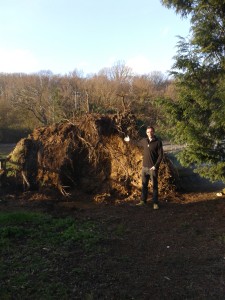 (Although high winds and the weight of the evergreen tree in the picture contributed to it falling over, it was the sodden ground in which its roots stood that caused it to tip, laying bare the root system you see. The ground was so wet and soft the roots had nothing to anchor to.)

Environment secretary Owen Paterson and Prime Minister David Cameron have pledged to dredge river channels, believing it to be a way to prevent flooding. But it is the saturated land, unable to hold more water, that needs looking at. Dredging rivers will just quicken the flow of water, causing further flooding at pinch points in the waterways.

Speaking to a gardener at South East Essex Organic Gardeners he insisted that, should there be a high tide or a storm surge towards London, the Thames barrier will save the city. However, the water has to go somewhere. Essex will be flooded.

This is the problem – the country needs places for the water to be held, allowing it to percolate down in its own time.

In Copenhagen solutions are being aired to cope with major ‘cloudburst challenges’. Surface runoff will be caught in rainwater catchment tanks and held there, below street level, possibly supporting plants that have no problem spending some of their lives being flooded. This will be the future for all major cities, where paved areas don’t allow water to filter away.

Most streets no longer have front gardens, as a necessity for parking spaces for two or more cars mean more asphalt, large stretches of it on each estate. Perhaps, as gardeners and garden owners, we can begin changing this and combating flooding in urban areas by adding more vegetation to these areas, or harvesting rainwater in tanks below the surface?

This problem is not going away. Adding sandbags is action too late. Depleting the force of fast flowing water and allowing rivers to stretch themselves out across floodplains is the way forward.

We hope at Modern Mint we can help design a garden that helps solve this problem.